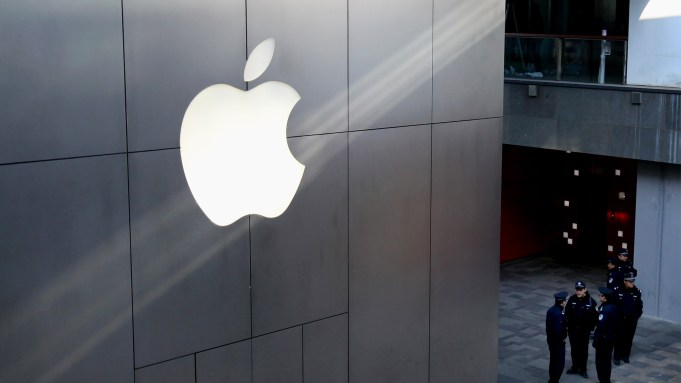 The Cupertino, Calif., behemoth behind the iPad and the iPhone is digging out an old advertising recipe in hopes of making a splash while consumers wait for its Next Big iThing.

Fueled by sales of its iPhones and iPads, Apple is a corporate giant and technology titan. In the second quarter, Apple notched revenue of $43.6 billion and net profit of $9.5 billion. Compare that to the New York Times Co., which generated just under $2 billion for all of 2012.

Yet Apple is strumming on its roots in a new ad campaign that creates the impression the colossus is merely a small, sophisticated cadre of well-meaning folks who just happen to create magical devices that transform our lives. In doing so, Apple nods to an earlier era when it was seen as an upstart, not an entrenched player that dominated markets and consumer sentiment.

“We’re engineers and artists. Craftsmen and inventors,” reads the copy accompanying one of the print ads in the new campaign. “We sign our work. You may rarely look at it. But you’ll always feel it.” The tagline: “Designed by Apple in California.” As if anyone could just stumble upon the company’s campus and wade into the glory. A spokeswoman for Apple’s ad agency, TBWA\Media Arts Lab, declined to comment.

Apple is offering up a new twist on an old ploy: Talking small and thinking big. Apple seized the nation’s fancy wayyyyy back in 1984 when it ran a Super Bowl commercial depicting an athlete hurling a large hammer at a screen broadcasting the numbing jargon of a Big Brother-type figure. The spot was seen as a jab against tech behemoth IBM, which Apple hoped to take on with its new Macintosh. Later, in 2006, Apple tilted at Microsoft with a humorous series of “Mac vs. PC” ads that featured actor Justin Long as a hip, easygoing Mac showing up a fussy, doddering PC played by John Hodgman.

There’s no way in this day and age Apple can be considered a start-up. So why is the company acting as if it is?

During a period when Apple has little product news with which to overwhelm Twitter, burnishing its reputation may be the way to go, suggests Gene Munster, a Piper Jaffray analyst who has followed the tech concern for years. Munster says the “California” campaign reinforces the notion that well-made devices take time – a nice note for investors who know Apple’s stock tends to grow when it has a brand-spanking-new gadget to draw the public notice and generate buzz for its wares. With talk of an Apple TV and some sort of iWatch in the offing, the current ad effort may simply be something thrown out to the masses to mull as they wait for new iGizmos, Munster said.

Others view the campaign as a defensive maneuver. According to Munster, Apple’s youth appeal, while significant, isn’t growing as it once did. So the company has to appeal to a broader swath of customers, some of whom may be turned off by pokes at tech giants by another tech giant (a reason why we have yet to see an Apple ad take a smack at rival Samsung). Rather than putting IBM or Microsoft in its sights, Apple is simply burnishing its rebellious history in a gather-round-the-campfire kind of way. “These commercials make them more mainstream—softer and friendlier,” said Jim Marra, a professor of advertising at Philadelphia’s Temple University. “They say, ‘You can count on us, we have the reputation.'”

If only Apple had something new to sell, too! “The marketplace has not seen significant game-changers since [Steve] Jobs,” noted Mark Faust, a corporate strategist who counsels companies on how to grow.

The emphasis on “California” also brings to mind a campaign from another big advertiser who found itself needing to curry public favor. Chrysler was on the outs after the recent recession, and snatched up two minutes in the 2011 Super Bowl to tell viewers – with the backing of an Eminem song – that its cars were “Imported from Detroit” (even though the company is these days owned by Italian automaker Fiat). Is Apple also trying to convey the thought that its products are designed by Americans (albeit manufactured byt the Chinese) in hopes of wooing away support from Samsung, its South Korean rival?

Apple advertising once captured the imagination and was universally considered cool. The “California” effort is the latest in a series of wild swings that have the company in one instance using celebrities like Zooey Deschanel and Samuel L. Jackson to sell its voice-operated Siri assistant, and in another offering an awkward “Genius” character from its stores to help solve technical dilemmas. These ads are a far cry from the company’s bewitching animated iPod spots, its “Think Different” campaign or its iPod blurb offering a sneak preview of U2 singing “Vertigo.”

Now Apple is as likely to produce commercial misfires as anyone with a smokeless ashtray to sell. Maybe that’s by dint of the fact that it’s producing more commercials these days in order to sell more products.

Whatever it is Apple designs in California, it’s not clear that any of it will hypnotize the public the way its commercials did in an earlier, more innocent time.