Continue to Variety SKIP AD
You will be redirected back to your article in seconds
Nov 21, 2013 9:00am PT

In a crowded holiday field, Fox and Disney position pair of older-skewing pics as good for kids, too 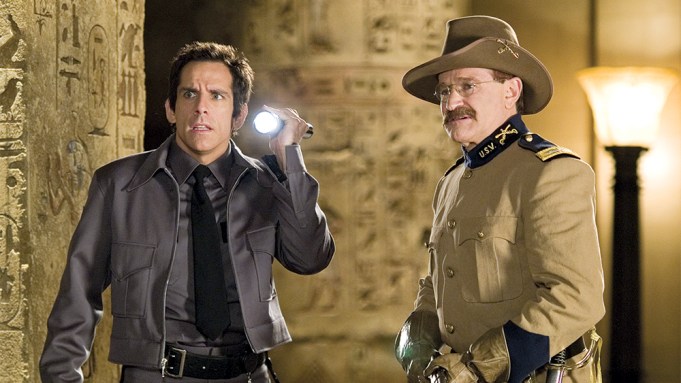 This holiday season, Disney’s “Saving Mr. Banks” and Fox’s “The Secret Life of Walter Mitty” are testing the boundaries of what it means to be an all-audience film, as studios strive to strike the right balance between adult drama and family entertainment.

But the challenge in attracting parents, teens and kids, by no means an easy feat for any movie, is made even greater for these outliers, given that there are already some high-profile family films in the crowded Thanksgiving-to-Christmas corridor, including Disney’s animated musical, “Frozen” and Warner Bros.’ “Hobbit” sequel, “The Desolation of Smaug,” which has an added fanboy component driven by premium large formats, including Imax.

This year, there are seven movies with predominantly family appeal that will bow throughout this month and next, compared with only five in 2012, and 10 each in 2010 and 2006.

The preponderance of family product during those two years caused cannibalization at the box office. In 2010, for instance, Disney’s animated picture “Tangled” — which had the same Thanksgiving launchpad as “Frozen” — played well into the Christmas period, which meant that other films with lighter family elements, such as Universal’s “Little Fockers,” and even Disney’s “Tron: Legacy” were left out in the cold.

“The key to a condensed play period like the Christmas holiday is to have the right balance of films,” says Chris Aronson, president of domestic distribution at Fox. “As it pertains to family films, which tend to have longer legs anyway, I think there is defi nitely the right number this year,” he adds.

Aside from “Mitty” and “Banks,” both of which hit theaters nationwide on or around Christmas, there are two other films with marketing challenges despite their family ties: Fox Searchlight’s generational urban-themed musical “Black Nativity,” which opens Thanksgiving weekend, followed by Fox’s “Walking With Dinosaurs,” an animated 3D feature, debuting Dec. 20.

Searchlight hopes that “Black Nativity” will be able to connect with multiple age groups by tapping into the popularity of the Langston Hughes musical on which the movie is based. The play has become a seasonal tradition in the African-American community.

“The fact that (‘Black Nativity’) comes out Thanksgiving weekend means families will have the opportunity to go to the movies together,” says Bishop T.D. Jakes, one of the film’s producers, who helped promote the pic to faith-based auds via his Dallas-based MegaFest.

Searchlight’s bigger sister studio, 20th Century Fox, meanwhile, needs to convince parents, and especially kids, that the BBC Earth-produced “Walking With Dinosaurs” is not a documentary.

In general, studios are looking to capitalize on the fact that most holiday family films have legs.

Typically, movies that are released around Christmastime have the highest multiples (how much a movie grosses beyond its opening) of any offerings during the year — and those that have family appeal have even greater box office potential.

“The Secret Life of Walter Mitty,” which cost about $90 million to produce, stars Ben Stiller, who also directed the film, as a shy man who, while often daydreaming of fantastical scenarios to escape his mundane life, actually embarks on a global journey of self-discovery. “Mitty,” derived from the classic short story by James Thurber, was given a family-friendly PG rating, though the somber tone featured in some of the film’s marketing materials, including the trailer, makes it an atypical choice for younger kids.

“There are a lot of ways to market ‘Mitty,’ ” Aronson admits, “and one of them will be as an adventure comedy with a great family message.”

Likewise, “Saving Mr. Banks,” which stars Emma Thompson and Tom Hanks, features family-friendly elements in its depiction of the making of “Mary Poppins.” The film’s PG-13 rating could limit its pull on families with young kids. Further, Disney is offering the picture in limited release Dec. 13 before its nationwide expansion the following weekend — a strategy more indicative of an eye toward awards than in making “Banks” a larger family event.

Still, “Banks” will benefit from having the Disney brand behind it. The Mouse has long dominated the year-end holiday corridor, especially over the Thanksgiving period, with past family hits like “Enchanted,” “Tangled” and “The Princess and the Frog.”

This year, “Frozen,” a CGI-animated musical loosely based on a Hans Christian Andersen story, figures to rule that market over the holidays. A mitigating factor is that the film will compete with Lionsgate’s juggernaut “The Hunger Games: Catching Fire,” which is on track for a $160 million-plus domestic opening Nov. 22.

“Frozen,” which was titled in similarly generic fashion as “Tangled” to avoid turning off young boys, has a giant hat to fill after the 2010 pic grossed nearly $600 million at the worldwide box office. Disney hopes that “Tangled,” along with last year’s “Wreck-It Ralph,” which grossed almost $475 million globally, will smooth the path for “Frozen” as it glides through the holidays.

“There is nothing else like it in the market within that five-week period (through Christmas),” maintains Dave Hollis, the head of worldwide distribution for Disney.

The challenge of selling “Mitty” and “Banks” to families could mean more repeat business for “Frozen” at Christmastime, especially if parents find nothing else to tempt their kids.

Fox, though, has succeeded in turning several soft-targeted titles into successful family events.

Last year, for instance, “Parental Guidance,” a comedy that starred Billy Crystal and Bette Midler, cumed more than five times its Christmas weekend opening ($14.5 million), grossing $77 million domestically. The studio’s Cameron Crowe-directed “We Bought a Zoo” wound up collecting more than eight times its Stateside debut, with $75 million in 2011. (Both films were rated PG, and benefited from a lighter holiday family lineup.)

“I’m a believer in the box office expanding to accommodate quality movies,” Disney’s Hollis says. “The idea of having a variety (of films) ultimately is great for the business.”