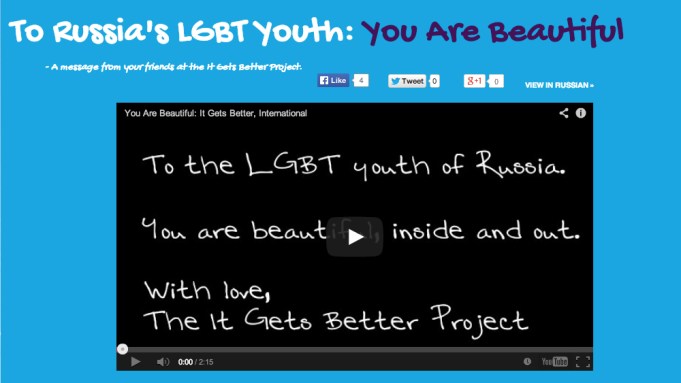 The It Gets Better Project — which, since its founding in 2010, has featured more than 50,000 videos with President Obama, Hollywood figures and others assuring LGBT youth of their worth — is launching a campaign aimed at youth in Russia, where a series of restrictions on LGBT expression were passed earlier this year.

The org, founded by Dan Savage and Terry Miller, said that with the Olympics approaching, “Russia will be the site of one of the most celebrated international gatherings in the world. At the same time, the former Soviet country will also be ground zero for an evolving human rights crisis, often resulting in violent discrimination.”

The Russian law that took effect in June bars “propaganda on nontraditional sexual relationships,” which human rights activists say is so sweeping, it threatens arrest for even journalists or filmmakers doing stories on the LGBT movement in the country. It’s become a flashpoint of the upcoming Winter Olympics in Sochi, Russia, as such orgs as the Human Rights Campaign have put pressure on Comcast to address the laws as NBCUniversal holds the rights to broadcast the games.

The new video, in English but also available in Russian translation, features a series of figures from around the world reiterating the project’s simple messages, including “You Are Beautiful.” The project said that it has partnered with affiliates of Children 404 to use social media to connect with LGBT youth.

“The It Gets Better Project hopes to reach the millions of LGBT youth in Russia to show they have international support against the outright discrimination happening across their country,” Ted Farley, the It Gets Better Project’s executive director, said in a statement. “We want every gay, lesbian, bisexual and transgender individual to know they are beautiful, valued and important, and that their friends and allies in the international community are keeping a close eye on their situation while working to end such injustice.”