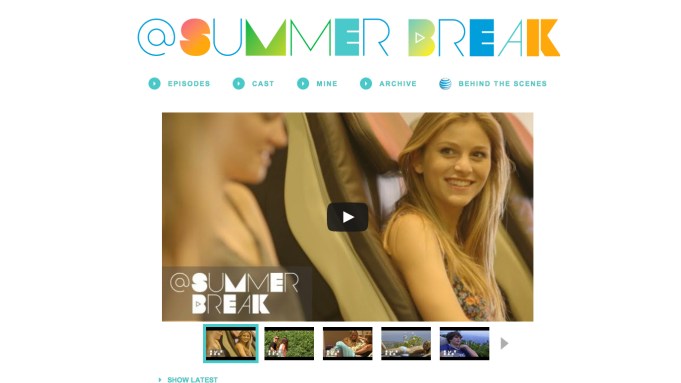 The last thing young people want during their summer break is a bunch of commercials that follow them around. What will these people make, then, of the subtle promotions from AT&T that appear in and around digital-entertainment property “@SummerBreak?”, which premiered June 17th.

The answer could have serious ramifications for marketing as more sponsors consider placing a bigger chunk of their ad dollars behind digital and social-media content. “@SummerBreak” is, in essence, a fascinating trial balloon: a “mobile series” that follows nine teens fresh out of high school for one last, memorable summer together. To see the “show,” as it were, viewers will have to follow the “@SummerBreak” Twitter feed, as well as those feeds belonging to the teens. By doing so, they can access links to videos, posts, Tumblrs and more. The content began surfacing Monday.

And in the process, perhaps, fans will come to understand a message telecommunications giant AT&T would like to put across: When it comes to staying connected, the company can help consumers do so. All the kids in “@SummerBreak” will be spotted using AT&T devices.

“You will see logos at the end of episodes the way you’ll see a production company logo, and you will see ‘pro-mercials'” or promotional video vignettes placed strategically in areas where “@SummerBreak” viewers might congregate for added content, like Tumblr, said Teddy Lynn, exec veep and director of content at BBDO New York, the ad agency that helped put the program together along with the Chernin Group and AT&T.

What people won’t see, however, are traditional TV ads interrupting the action, or phrases like “powered by AT&T” or “brought to you by AT&T” — even though the company’s support of the programming venture is believed to be substantial (AT&T declined to comment on its financial arrangement with Chernin Group).

Linking an ad message to a new-media property like “@SummerBreak” is a task advertisers must master, and quickly, too. Among millennial consumers between the ages of 19 and 36, 76% own a smartphone, 73% own a laptop and 68% own a game console, according to research from Nielsen.

But unlike the boomer generation that has dictated media-consumption habits for decades, the younger counterparts are more likely to watch all kinds of content on mobile devices.

To reach younger consumers who will, presumably, one day become mainstream purchasers with money in their wallets, advertisers must figure out how to fit into ventures like “@SummerBreak.” “I do think this kind of thing is developing and becoming more important,” said AT&T’s Christopher. “It’s definitely something we have to figure out. We know we have to be in the middle of it, and we are learning what we can.”

The question will be whether AT&T can find enough return on “@SummerBreak” to make moving more of its massive TV ad budget toward entertainment of a new era. AT&T spent approximately $1.2 billion on television in 2012, according to data from Kantar Media, the biggest chunk of the $1.68 billion it placed in traditional media.

The task is not an easy one to accomplish. Younger consumers are notoriously tech-savvy. Bore or offend them and they’ll move elsewhere with the click of an app or mouse. And they are extremely resistant to ad messages, having grown up in an era when their favorite programming is available on-demand through a dizzying array of media venues. If you won’t entertain them, they’ll find someone else who will — fast.

But aligning with them is crucial for advertisers, particularly telecommunications companies, which are trying to ride a boom in desire for mobile devices that have fast become as ubiquitous as wallets and eyeglasses. When the CW launched “Gossip Girl” in 2007 , it set about finding an advertiser that would allow its mobile phones and devices to be seen in the hands of trendy characters like Serena van der Woodsen and Chuck Bass. A furious four-way battle ensued among Verizon Wireless, T-Mobile, Sprint and AT&T (Verizon won the bake-off).

Advertising these days also means grabbing a chance to influence potential media behavior. If AT&T can make the case that its devices help the “@SummerBreak” cast keep in touch with friends, post, like, tweet and comment, the company may prompt viewers to use its products to do the same. Similar thinking may have been behind the company’s decision to align itself with “American Idol” and encourage viewers to text-message their votes for show contestants.

Even as marketers feel a pressing need to get their wares and slogans in front of this audience, they probably can’t do it with the same gusto they would use when hawking their wares on the boob tube. “This is entertainment first, but there’s an inherent but real subtext to the show that’s about connectivity and expression through connectivity,” said Billy Parks, exec veep of digital production and programming at the Chernin Group, as well as an exec producer and co-creator of “@SummerBreak.”

The show’s backers would prefer the on-screen action make the ad message clear, rather than using traditional ads, said BBDO’s Lynn. “We’re really betting on the fact that we are showcasing a behavior that is so inherently mobile and relevant it helps AT&T,” he said.

A Stop in ‘Malibu’

The original idea for “@SummerBreak” came from conversations between longtime friends Parks and Lynn that started in early 2012, both executives said. Parks reached out to Lynn about devising a concept that would embrace the entertainment-consumption behavior of the younger generation: use of so-called “second screen” technology that allows fans to comment on their favorite programming when they watch it and while they wait for more of it, too.

Lynn suggested a “multi-perspective” storyline that depended on many characters’ viewpoints, rather than the normal single-camera approach employed by TV reality programs. His theory was that “reunion” episodes of popular reality TV shows seemed to perform well in general, largely because audiences got to sample perspective from many different cast members. One name for the project early on was “Malibu,” Lynn said. Among many ideas bandied back and forth was the concept of looking at a modern day “War of the Worlds” in which Earth is infected with a contagion.

AT&T may be happy if it can just, well, reach out and touch someone taking part in “@SummerBreak.” Ringing up sales seems to carry less importance — at least for now. “It’s a real experiment for us,” said Christopher, the marketing executive, of the alliance. Younger consumers “are 110% mobile first. We’re a mobile company and we want to speak to them the way they live their lives.”