Continue to Variety SKIP AD
You will be redirected back to your article in seconds
Aug 9, 1974 11:32am PT 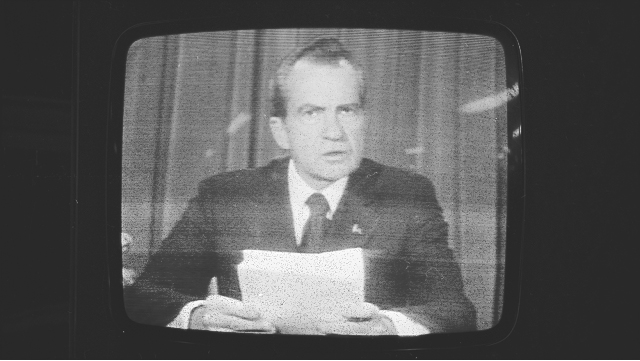 Had More Hours On Tube Than Any President In History; Last Official Act Is High Drama

Six years to the day after he was nominated by the Republican Party to be President, Richard Nixon last night resigned as Chief Executive — an historic, unprecedented event which was viewed by millions of Americans over the electronic miracle known as television.

CBS, NBC and ABC all aired the farewell address of President Nixon, as he confirmed earlier reports that he was resigning — all the backlash of Watergate and what had been a pending impeachment hearing in the House and possible trial and conviction in the Senate.

Nixon, who for almost all of his political career was at odds with the news media, did not take any parting shots at tv news in his resignation, a fact duly noted by CBS’ Eric Sevareid, himself often the target of Administration criticism when it had zeroed in on tv’s “instant analyses.” So sharp was CBS reaction to such criticism that it dropped those for a time.

Sevareid also observed that Nixon’s farewell was unlike that of former Vice President Agnew, who when he resigned last year assailed the tv news media and press.

President Nixon appeared a bit grim in his final appearance as the nation’s leader, but he was in control of his emotions. It was one of the shortest Nixon speeches in memory, just 16 minutes long.

The President’s resignation, due to the fact he had lost almost all support in Congress and thus faced the alternative of conviction in the Senate, undoubtedly drew a record number of viewers for an address by a politician.

Richard Nixon at the White House with his family after his resignation as President. photo credit: Keystone/Hulton Archive/Getty Images

Nixon’s history-making move played havoc with network schedules, as they junked regular primetime programming for special news reports, reaction from here and abroad, devoting the entire night and then some to the ramifications of the Presidential decision.

ABC-TV was on until the wee hours of this ayem, with the focus on reaction, as correspondents were brought in from all over the world via satellite to bring the American public global response to Nixon’s action. Domestic reaction was not overlooked.

CBS-TV also junked its regular sked, and was on until 4 a.m. Coaat time, with reaction from around the world via satellite, as well as on the home front.

NBC-TV, too, turned the night over to coverage of the fast-breaking Washington events, with its final coverage at 11 p.m. Johnny Carson’s “Tonight”show was bumped by the news special, as were the primetime programs.

All three networks were on before Nixon’s address, covering all aspects of the President’s situation, Watergate, the events leading to the unprecedented resignation. Walter Cronkite anchored it all for CBS; John Chancellor, for NBC; Howard K. Smith and Harry Reasoner for ABC.

There was irony in Nixon’s fateful move being proclaimed on television, a medium he has bitterly assailed many times during his political career, charging tv news with “liberal bias,” with slanting news, with unfairness in its coverage of him. As a matter of fact, no Chief Executive in the 26-year history of the electronic medium has ever waged such an all-out assault on tv as had Nixon, the barrage reaching its peak with tongue-lashings aimed at tv news by former Vice President Agnew.

It is probable no President has used tv as extensively as has Nixon during the years he functioned as Chief Executive. He had been on CBS on 164 occasions since his inauguration Jan. 20, 1969. That network had no figures to compare this with previous Presidential tv appearances.

Nixon appeared on NBC 75 times, with major addresses or press conferences, those appearances totalling 48 hours, 38 minutes. This was over the 5″6- year period since he became President. By comparison, the late President Johnson was on NBC 97 times, but the total for those appearances amounted to 47 hours, and it was over a longer period of time, from Nov. 22,1963, to Jan. 20, 1969.

ABC reported he was on that network 78 times since his first inauguration, that this added up to a total of 38 hours and 37 minutes.

No Friend Of Tv

Nixon was no friend of the tube, and it was while he was President that the Federal Communications Commission hit tv hard in many ways, including slapping network primetime with the access rule; the Dept. of Justice-pressed antitrust action against the nets; he appointed a director of telecommunications, Clay T. Whitehead, whose main job initially seemed to be lashing out at tv with special attention to tv news.

It was the Nixon Administration which took great umbrage over the CBS spec. “The Selling Of The Pentagon,” a show critical of Pentagon p.r. methods. That hassle resulted in the government taking CBS to court, with the network eventually the winner, a victory which scarcely eased the Administration ire against tv news.

Nixon’s antagonism to tv undoubtedly began in the 1960 campaign in which his opponent was John F. Kennedy. Turning point there were those Kennedy Nixon debates, and Nixon always blaming tv for this, claiming the tv cameras made him look less than good.