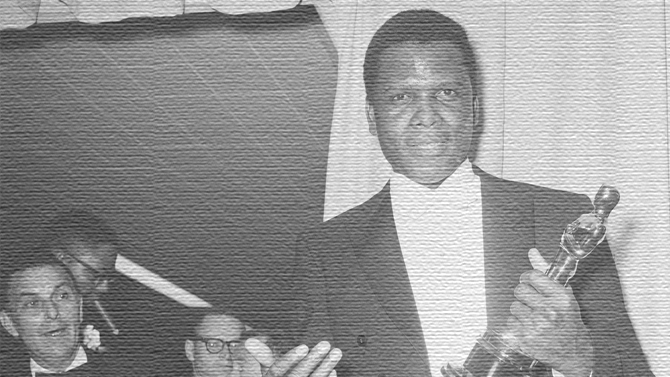 Santa Monica, April 13. — “Tom Jones” won the Best Picture prize in the 36th annual Oscar Awards at the Santa Monica Civic Auditorium tonight, but the sweep which had tender in all pre-Academy polls failed to materialize. It was a gala night marked by a number of upsets, the principal one being Sidney Poitier’s garnering the “Best Actor” Oscar for “Lilies Of The Field,” an award which had been believed would go to Albert Finney in the wake of a “Tom Jones” sweep.

The UA-Lopert Pictures sex comedy, “Jones,” also carried Tony Richardson to best direction, won for best screenplay based on material from another medium, and beat music score substantially original. However, with three of the five nominees in best supporting actress category, “Jones” failed to win that bracket, the Oscar going to Margaret Rutherford for “The V.I.P.’s.”

Most popular choice of the night, without any doubt, was Poitier, who received a tremendous ovation. Beaming, the actor quickly made his way to the podium, briefly mentioned “the long journey to this moment,” and emotionally issued a “very special thank you.” He became the first Negro to win this major recognition.

An absentee winner was Patricia Neal, voted Best Actress for her performance in “Hud!” Annabella raced down the aisle, to accept for her, and explained Miss Neal had the best possible reason for not being present — that she is expecting a child. Another absentee winner was Richardson, whose Directorial Oscar was accepted by writer Ivan Goff.

The Irving Thalberg Award had been voted this year to Sam Spiegel, who discarded his prepared speech, instead expressed confluence the film community “will exert its influence in every comer on earth,” and thanked the Academy for the award.

There was a brisk, business-like air about the annual proceedings, with a few of the presenters grumbling that they had been cautioned not to ad lib. This made for an efficient presentation, although it was not particularly showmanly or colorful.

However, the presentations were given a bright spark and infection of gaiety with Sammy Davis Jr.’s presence. He impersonated Jerry Lewis, when emcee Jack Lemmon tapped him on the shoulder and cracked: “Not on this network!” a reminder of Lewis’ two-hour show on ABC-TV, which folded after 18 weeks this season. In a mix-up in which Davis was handed the wrong envelope, he had the audience howling when he told Lemmon: “Wait till the NAACP hears about this!” Davis’ versatile talent was the entertaining highlight of the night not only with his clowning, but singing and dancing, on a medley of plx tunes which did not win Oscars In past years. Numbers like “Blues In The Night,” “Pennies From Heaven,” “It’s Magic.” He received an ovation when he wrapped up his great routine.

Those tv commercials, which are not appreciated within the confines of the Oscar presentation, again came in for some acid criticism, this time from Lemmon. After one particularly long blurb, he commented maybe there would be a nomination for long commercials — the Academy could use the money. Lemmon’s opening monolog was, on the whole, lacklustre. He got off one nifty about “Tom Jones,” that there had been nothing left to censor in pix until the British discovered eating was sexy.

Academy prexy Arthur Freed spoke briefly, stressing that the Awards are now international in importance. This, incidentally, was best illustrated by the presence of Italy’s Federico Fellini and others who jetted here for the annual Hollywood big night. Fellini’s trek was not wasted, the director-producer taking an Oscar when his “8 1/2” was named Best Foreign Lingo Pic Accepting his golden trophy, Fellini offered his “deepest and most humble thanks — arrivederci.”

A popular winner was Melvyn Douglas, given the best supporting actor award for his performance In “Hud.” Unable to appear because he is working in Spain, his Oscar was accepted in his behalf by Brandon DeWilde.

Another winner who couldn’t make the trek was Margaret Rutherford, named best supporting actress for “V.I.P.’s.” Peter Ustinov accepted for her.

When seven won for art direction on “Cleopatra,” and three for its set decoration, some of the winners gathered at the podium and it looked like a convention.

Cracked Lemmon: “They get together, melt them (the Oscars) down, and ‘Cleo’ is off the nut.”

Sketches were shown of designs and pix clips of the nominated films and performances. Goofs were at a minimum this year, although Rita Hayworth twice said “Tony Richards” instead of Richardson, in referring to the British director.

In every such occasion, there emerges a brief gem, or call it a moment of truth. Last night, it came from Emil Kosa Jr., winner of an Oscar for special effects for his work on “Cleopatra.” Receiving his Oscar from Angle Dickinson, Kosa gallantly remarked: “I wish I could take the lady home instead of this little Oscar.”

In summing up the presentation, the hand of George Sidney, who produced the show for the Acad, was strongly visible.

“I am delighted and pleased to have been selected for this award,” Sidney Poitier said backstage after winning the best actor Oscar for “Lilies Of The Field.” “I should hope it will mean added opportunities for people of my race in future Hollywood pictures.”

Poitier revealed he is now discussing two additional pictures with Ralph Nelson, director of “Lilies,” but added, “First I want to rest, then I want to go to work.”

ABC-TV’s pre-Oscar news coverage last night — within 30 minutes of the ceremony going on the air — turned up with a bearded Sterling Hayden being carried out of a San Francisco automobile showroom, one of several targeted for sit-in demonstrations protesting alleged discrimination in employment.

On same newscast, Natalie Wood and Shirley MacLaine each picked up two man-in-the-street votes, but the fellow who picked Shirley as a potential Oscar winner ungallantly added he would rather see the best actress award go to Hayley Mills because he’d “rather have clean pictures.”